All Slam Sticks are calibrated before leaving the facility, but this calibration is fully exposed to the user and can be adjusted.

All Slam Sticks are put through a calibration procedure that vibrates the device at 10g peak, 100 Hz in all three axes. A closed-loop shaker control system with a calibrated reference accelerometer is used to ensure the profile is as expected. Below is an image of one of these recordings/events, and here is the recording file. 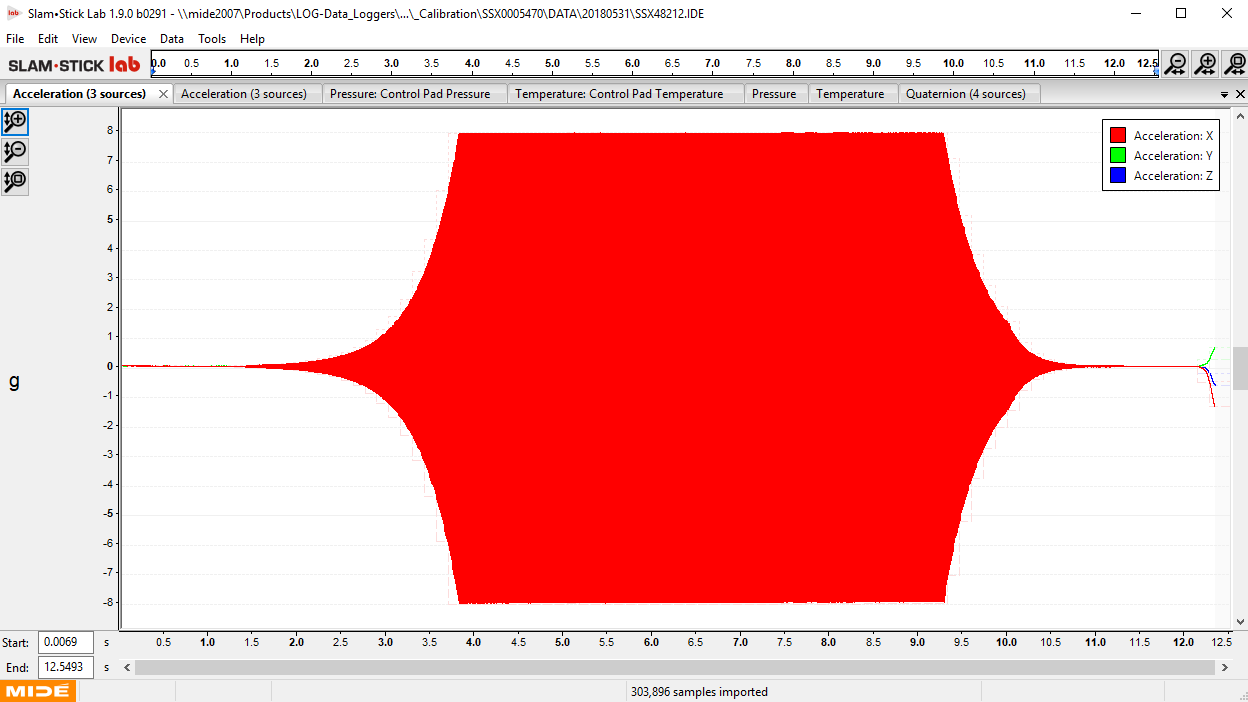 As can be seen from the data, the recorder did not accurately measure the acceleration at 10g, instead, it was approximately 8g. A software script calculates this gain needed (1.25 = 10/8) and applies it to the device. In a similar calculation for DC response accelerometers, it calculates the DC offset to account for gravity. A calibration certificate ( download example here) is generated and saved to the device, an example is shown below. 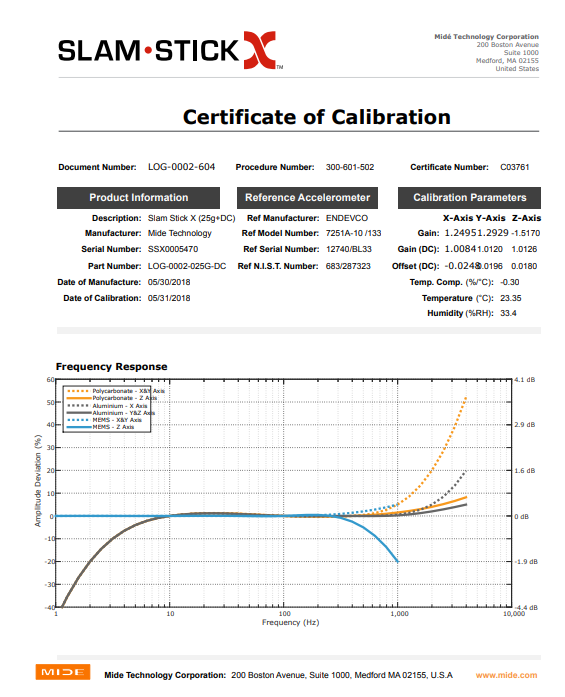 The calibration applied to the recorder is also saved internally to the device, and these parameters can be accessed in the ‘Factory Calibration’ tab located next to the ‘Measurements’ tab in the configuration menu. This menu displays the specific gain and offset terms (and any bivariate terms if/when temperature compensation is needed) and it also displays the bivariate polynomials created from the initial calibration process of the Slam Stick. 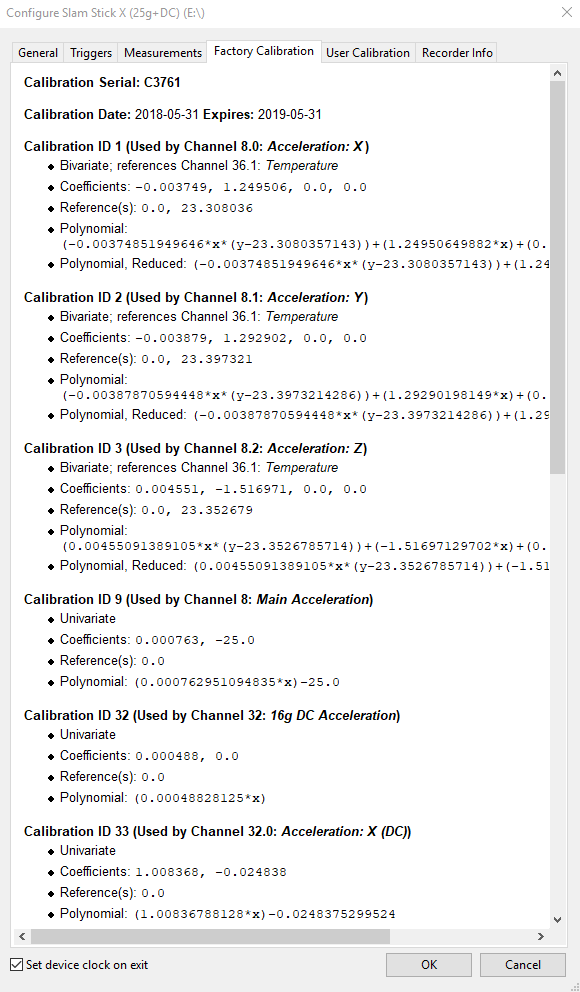 These equations are how the Slam Stick converts raw acceleration data into a calibrated form when displayed in the Slam Stick Lab software. There are either one or two levels of calibration. One converts from raw integer data to engineering units and double format. The second level of calibration/conversion is applied by Mide to compensate for part-to-part variance. In the example above we have a 25g accelerometer. This means it can measure a 50g range and has 16-bit precision. The raw data is saved in 16-bit integer so in order to be converted to engineering units it needs to scale the 16-bit range to 50g. This is calculated by multiplying by 50 and dividing by 2^16 (65,536) which equals 0.00076 g. Then this range needs to be decreased to be centered around 0, so subtracting 1/2 the measurement range.

Then the per channel and part-to-part variance is calibrated with more simple terms that should be either close to 1 for gain, and close to 0 for compensating DC offset inaccuracies.

The calibration polynomial is applied to recorded data when plotting, analyzing, and exporting data. This calibration can be adjusted after the fact as necessary if/when it is determined that the calibration has drifted over time. To adjust this polynomial, navigate to the Data menu and 'Edit Calibration Polynomials...' 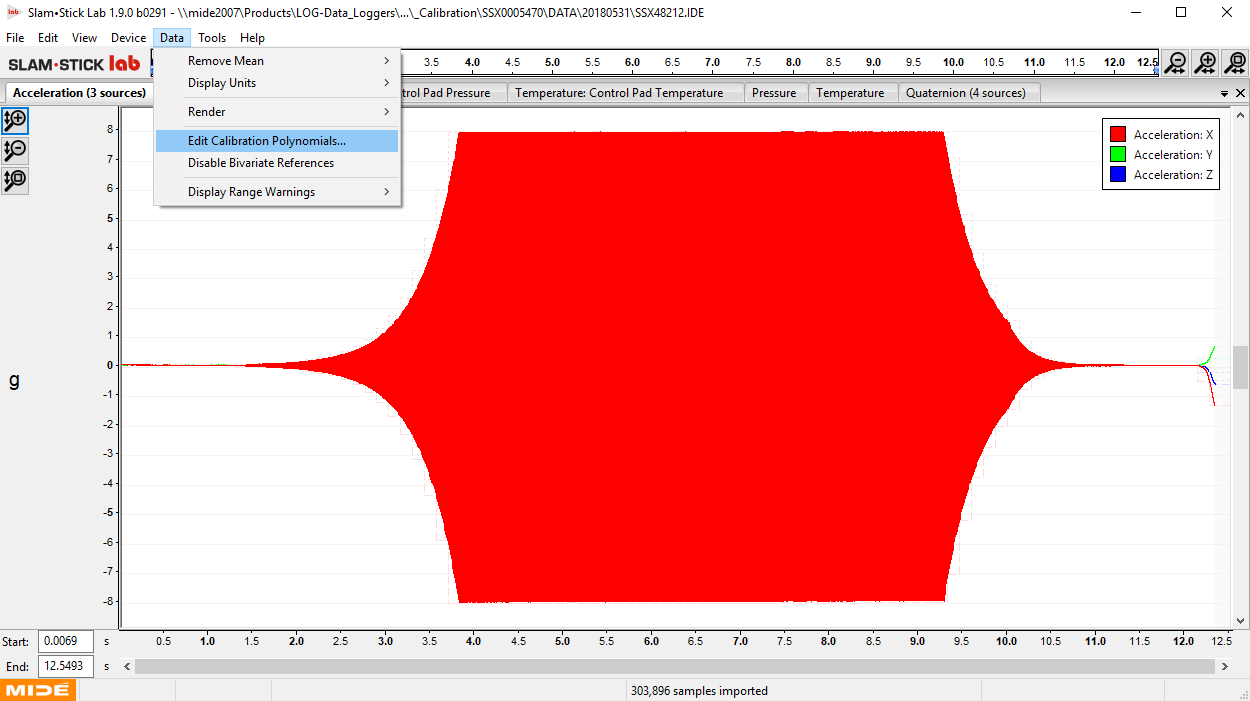 In that menu, the calibration values can be adjusted to influence the plotted, analyzed or exported data. Back to the example of the recording during the calibration process, the calibration polynomials are all 1s and 0s. To compensate the data to reflect the required calibration terms, we can edit the gain term of the X axis to 1.25 which is determined by dividing the known reference acceleration (10g) by the value measured (8g) as shown. 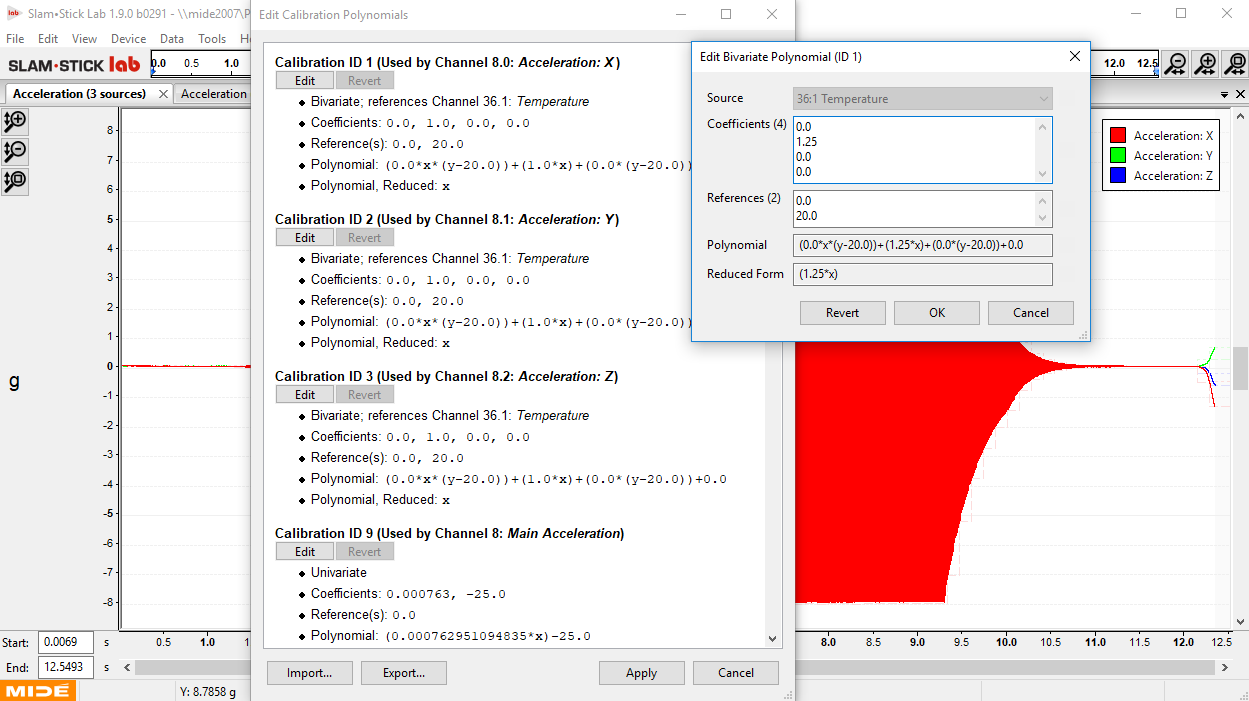 Hitting apply will update the plotted data to reflect this change in the calibration polynomial as shown. 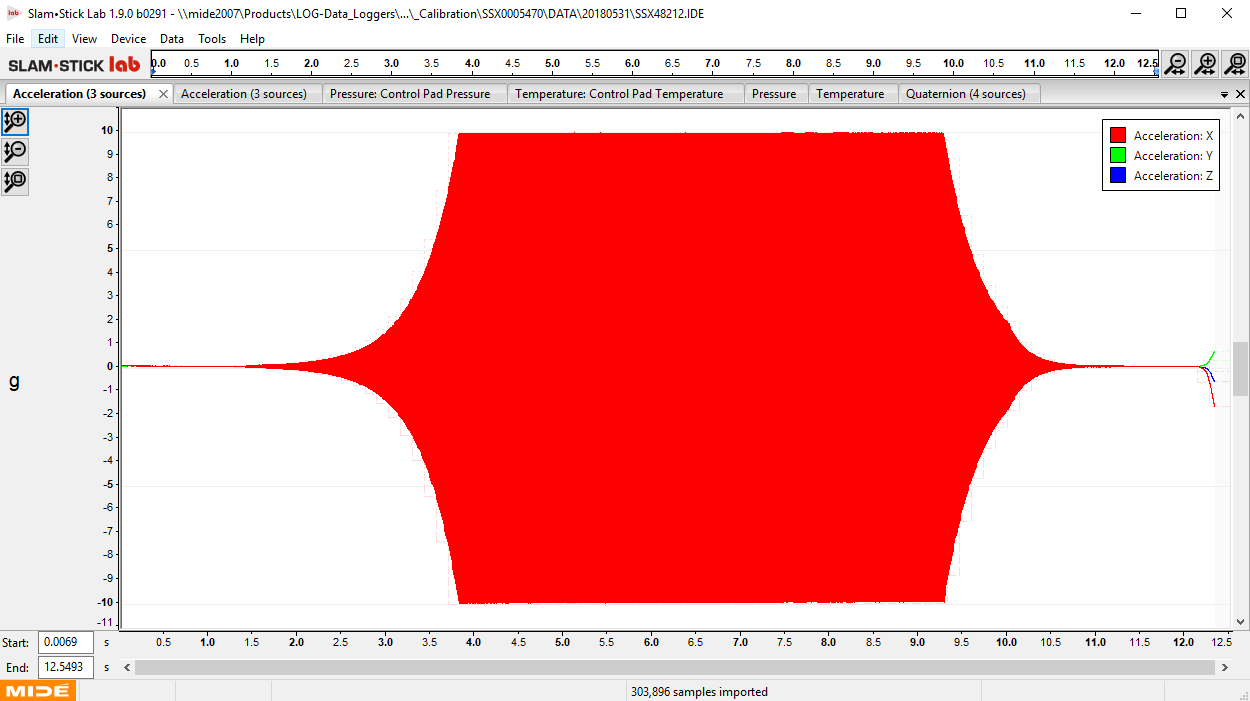 The ‘Factory Calibration’ tab located next to the ‘Channels’ tab displays the bivariate polynomials created from the initial calibration process of the Slam Stick. These equations are how the Slam Stick converts raw acceleration data into a calibrated form when displayed in the Slam Stick Lab software. These polynomials are also the required equations for exporting raw Slam Stick data into another analysis software, such as Python or MATLAB (See Exporting Data for more information on exporting data to MATLAB or Python).

If and when it is determined that the calibration on a Slam Stick needs to be updated. The user has two options, first they can send it back to Mide for recalibration. Or second, they can apply their own calibration. To do so, navigate the configuration screen and the 'User Calibration' tab once an appropriate Slam Stick has been identified. 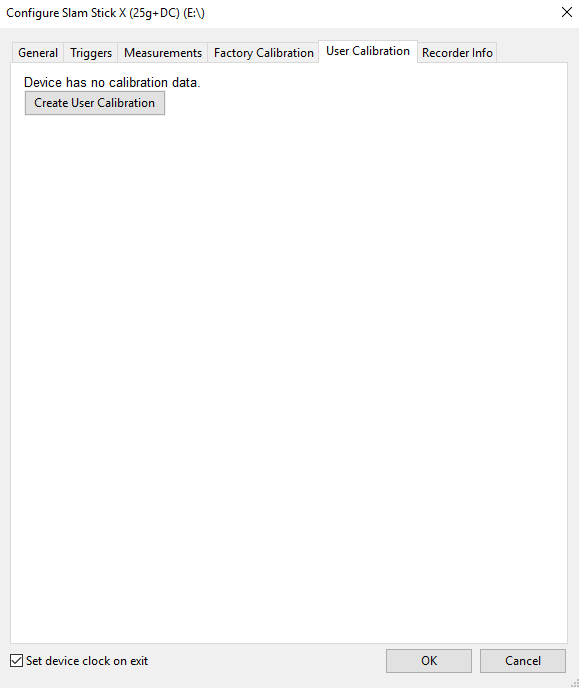 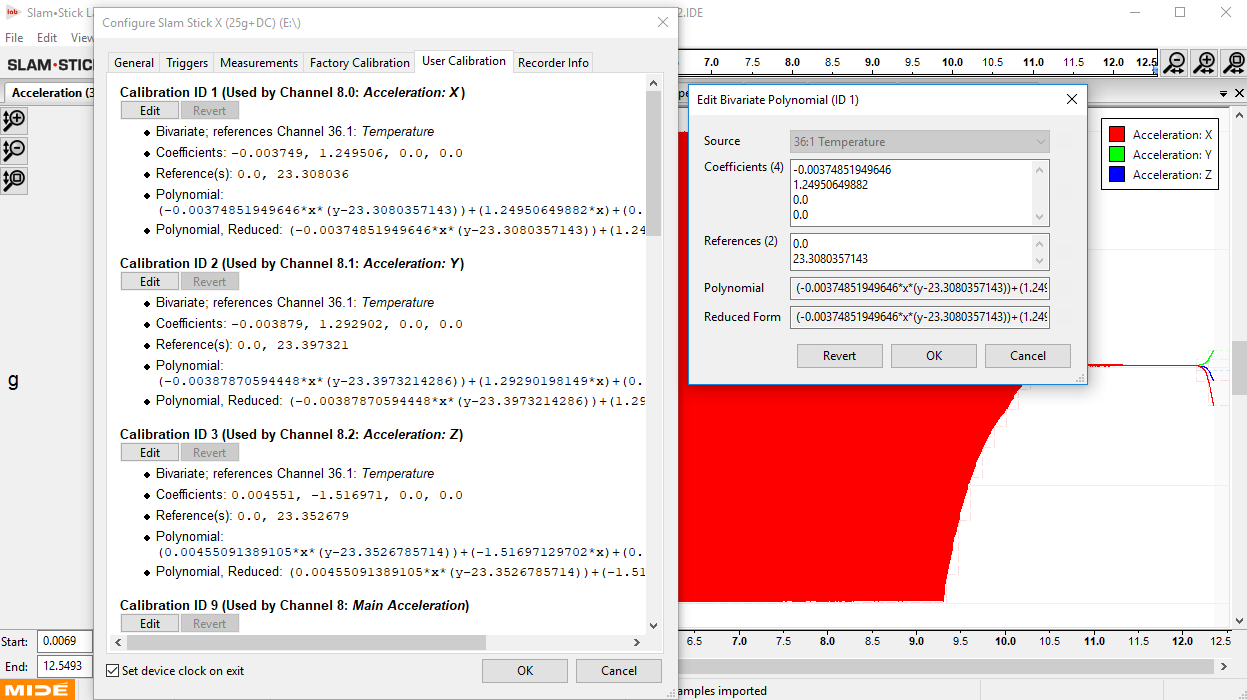 Did this answer your question? Thanks for the feedback There was a problem submitting your feedback. Please try again later.
Last updated on October 4, 2018