The Slam Stick products have a variety of trigger settings to help preserve battery life and ease processing needs later on to only record events of interest.

All of the following content assumes your recorder is running the latest firmware revision. If anything below does not match your UI, then see the updating instructions.

In order to set each trigger value, the box next to the trigger must be checked. depending on the state of "Wait for All Sensor Conditions" the recorder will begin recording when any (if unset) or all sensor conditions have been met. No sensor input will be considered before the timestamp configured under "Start trigger sequence at specific time", and sensor input will be optionally considered during a recording delay/interval countdown.

For example, if "Delay Or Trigger" is selected along with a sequence start time at 9 AM, with a delay of 10 seconds, and a pressure, temperature, and acceleration trigger are selected, but NOT "Wait for All Sensor Conditions", after a button press the recorder will sleep until 9 AM, then sleep for a maximum of 10 seconds, or less if any of the 3 configured sensor conditions is met.

If the recorder was configured to "Delay Then Trigger" above, then after 9 AM, the recorder would sleep for a minimum of 10 seconds, and then wait for any sensor condition to be met.

When a Slam Stick is waiting for a trigger, the LEDs on the Slam Stick will flash Red, then Red & Green, alternating until the trigger is reached. When waiting for the main accelerometer trigger (to guarantee pre-trigger samples) the flashing will be at a faster rate.

This mode will set a MINIMUM delay before recording starts. Recording Delay/Interval functions normally, and no sensors are powered on until this delay expires.

This mode will set a MAXIMUM delay before recording starts. The recorder will sleep for a most the configured time, and will power up sensors to cut this wait period short if any configured condition is met. This is useful in case an event is expected, but data is still desired in case the event happens late or not at all.  An example use case is when you would like periodic check points on the health of the system as well as capturing specific events.

The Recording Delay/Interval trigger tells a Slam Stick to wait a user-determined number of seconds AFTER THE BUTTON IS PRESSED before beginning a recording. This trigger is useful for applications where installation of the Slam Stick and when the Slam Stick should start recording are not the same instance in time, but the latter will be in the near future. This trigger is also useful for extending battery life of the Slam Stick. This is also a useful trigger to use in conjunction with the re-triggerable setting and a limited recording time. For example, if the user wants to record 10 seconds of every minute. The Wake After Delay will be set to 50 seconds, the recording time should be limited to 10 seconds, and the re-triggerable box should be checked.

Wake at a Specific time

Please note that, due to the UTC offset, this setting can sometimes be difficult to understand and program correctly. We encourage you to do some testing on your desk before proceeding to your end test.

The Recording Time Limit trigger allows a user to set the number of seconds a Slam Stick will record for AFTER THE BUTTON IS PRESSED. This trigger is useful in applications where the user intends to use the Slam Stick for measurements of short duration. Setting this trigger will prevent unwanted data from being recorded after the desired measurement has been taken.

Setting this configuration allows the Slam Stick to take multiple data files without user interaction. The Retrigger option is a useful configuration setting for when multiple recordings of specific events need to be measured. This function can be coupled with the Limit recording time to trigger to generate multiple, smaller recording files over the course of a test.Tip: For users looking to take periodic measurements, this can be achieved by coupling the Recording Time Limit with Retrigger. For example, a 1-minute recording every 15 minutes could be achieved by programming a 60 second recording time limit and an 840 recording delay as shown.

For users looking to take periodic measurements, this can be achieved by coupling the Recording Time Limit with Retrigger. For example, a 1-minute recording every 15 minutes could be achieved by programming a 60 second recording time limit and an 840 recording delay as shown. 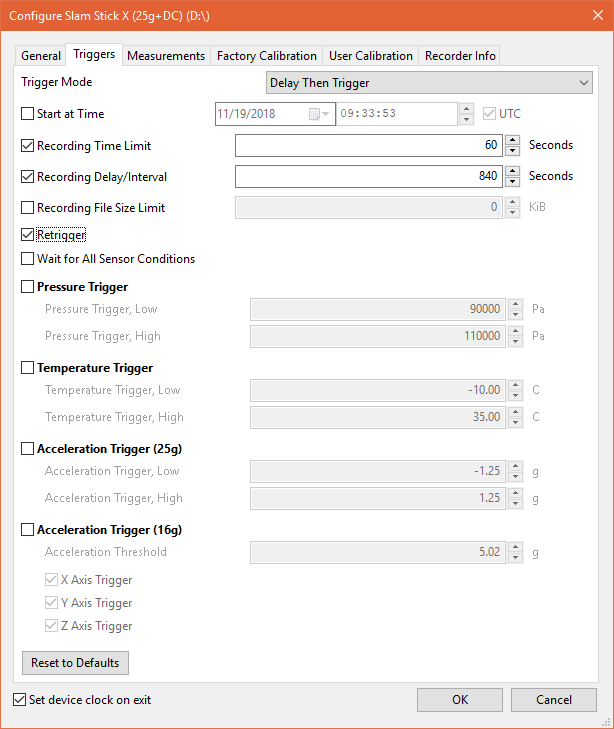 Wait for All Sensor Conditions

If this field is selected, then recording will not start until all sensor conditions have been met in the same time slice. For instance, the accelerometer input will not be considered if a temperature trigger is configured but the measured temperature is outside the configured range.

Conversely, if this field is not selected then any single sensor condition matching will cause the recorder to start recording.

The Pressure and Temperature triggers perform the same function, but with different measurements. Each trigger has an upper and lower value that must be set. These upper and lower values are what the Slam Stick looks for to know whether it should begin a recording or wait. If a temperature or pressure event occurs that exceeds the upper or lower values, the Slam Stick will consider this condition met, and will start recording if "Wait for All" is not selected, or if this is the only trigger.

Please note that, although the device can use temperature or pressure to start a recording, it will not stop the recording if the temperature/pressure returns to a level inside the trigger range. Limit the recording length and turn on re-triggerable if you are only interested in data when it is outside the specific temperature and/or pressure range.

The pressure and temperature trigger windows set the window to exit before starting a recording. For example, if a pressure trigger window of 90 kPa to 110 kPa is set, the device will start recordign at pressures below 90 kPa or above 110 kPa.

The acceleration trigger should be used when the application asks that only vibrations exceeding a specific acceleration should be measured. This is a useful trigger for measuring shock events, and when coupled with the Limit recording time to trigger, the battery life can be extended for a Slam Stick and save the user from obtaining unwanted data.

The main acceleration trigger uses the piezoelectric or piezoresistive accelerometer which are on the analog chain. There are several important distinctions between the analog/main trigger and the DC trigger:

Please note that, although the accelerometer is calibrated, this calibration is not "seen" during triggering and recording. This includes the DC offset. It is advised that trigger levels always exceed at least 1/5 the recording range of the accelerometer.

But if the user would prefer to use the main accelerometer as the trigger and get as close as possible to the true trigger condition, you will need to determine the offset values of an accelerometer, do the following:

This trigger uses the DC MEMS accelerometer for triggering. If pretrigger samples are not needed, Midé recommends using this trigger over the analog accelerometer trigger for three reasons:

One thing to pay attention to is the gravity vector though for this accelerometer. If you set the trigger level to 0.5g in the Z axis and the Slam Stick is sitting on a desk, it will trigger because it reads a 1g acceleration due to gravity.

In some applications, it is imperative to not only know that an event occurred but to also understand the event itself which will require as much raw data as possible. There are no pretrigger samples generated when using the DC accelerometer, only when using the main (analog) accelerometer.  For vibration test applications this is typically not a concern, but shock testing will need to use the main accelerometer to fully capture the event.To illustrate how these affects the actual data, let's see an example. The two tests used the same recorder with two different configurations as shown. On the left, the DC accelerometer trigger is used, the one on the right shows the main accelerometer trigger. 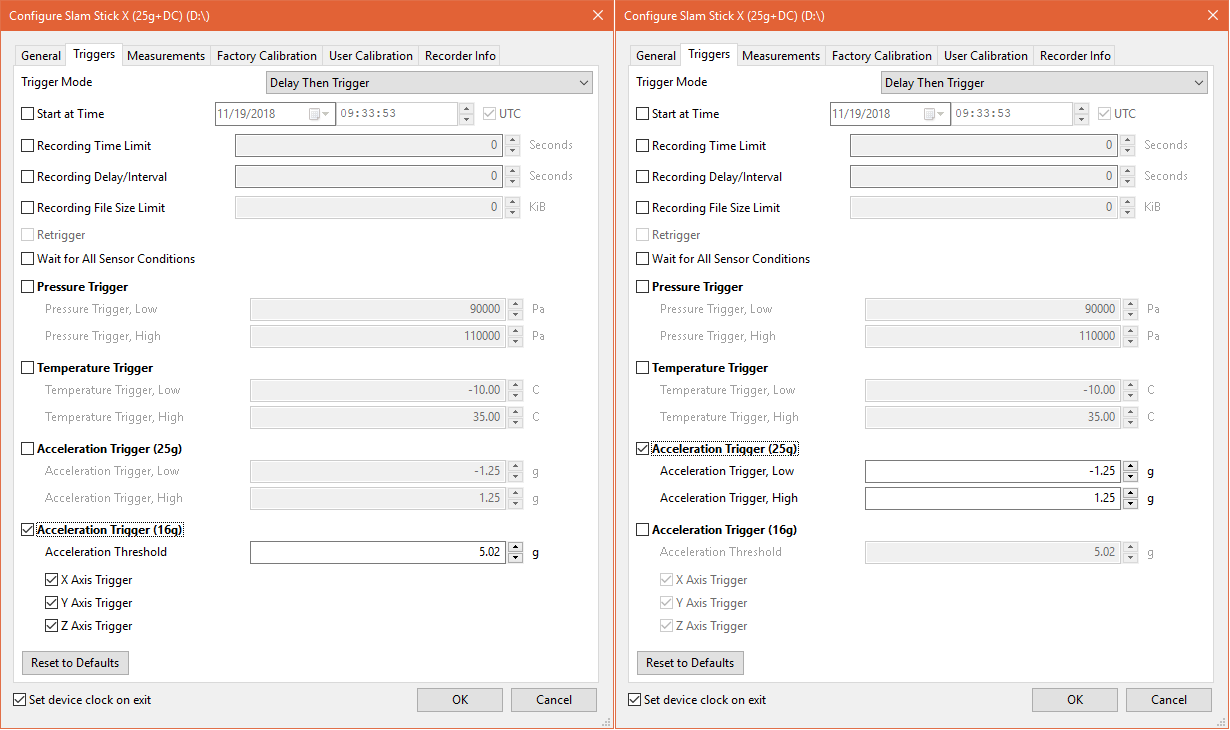 The recorder was dropped on an industrial carpet in an office space (very thin, concrete below it) with a drop height of 2 inches. The data is shown below. At initial glance, the first test appears to have only captured a ~40g shock event. In actuality, because it was using a low-power trigger mode, the first peak was completely missed, those other peaks are when the recorder bounced on the carpet.

To illustrate how the beginning of the drop test was missed, in the next example the device is dropped on a pillow, again from only 2 inches. On the left with the low-power trigger mode, by the time the accelerometers start saving data, the initial part of the pulse has occurred and therefore missed. On the right, the initial drop (even showing the effect of gravity in free-fall) is captured before the recorder impacts the pillow.

The data generated in these tests can be  downloaded by clicking here.

Did this answer your question? Thanks for the feedback There was a problem submitting your feedback. Please try again later.
Last updated on April 13, 2020