Our enDAQ sensors are typically used in replace of large laboratory equipment that can't be brought out into the field to test harsh environments.  So it is important that these devices can survive these harsh environments our customers are testing in!  We have done several qualification tests to verify survivability and operation in certain environments that will be explained below.  Also, remember that we have sold over 10,000 devices around the world to engineers who typically use these in very harsh conditions and have maintained less than a 3% field failure rate.

All of our sensors are rated to operate between -10°C and 80°C. Operation outside of this temperature range is possible, but the device will mark all recorded data outside this range as potentially inaccurate. Testing has shown that an enDAQ sensor is capable of operating for short durations (<3 hours) at 80°C, but it is not recommended to perform extensive testing at this temperature. The battery life of the sensor is affected greatly at temperatures below -10°C and it is not recommended that the device is used in an environment where the temperature is lower than -10°C. The expected battery life is reduced by about 50% at -10°C.

As part of the development effort for the US Navy and before we started selling the devices commercially, we did some out-of-house shock and vibration qualification testing. Shock testing was performed to qualify the sensors to over 3,000g.  These tests also compared acceleration data captured by the sensor at high shock levels to the reference shock accelerometers.  Below is a summary of the shock data showing linearity for different units (polycarbonate and aluminum) and different mounting methods (taped and bolted). 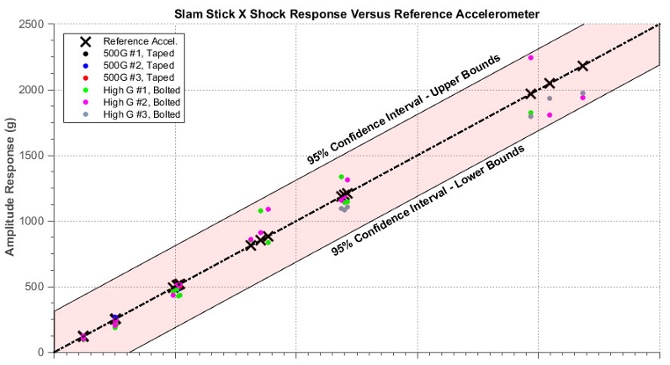 The NTS report on that shock environment is available here.

Another important note to make is that there have been over 9,000 units made and delivered around the world for shock and vibration testing.  Our typical customer is using these devices in pretty harsh environments yet we have maintained a field-failure rate of less than 3% (and when units do fail, we happily replace them!). We like to cite this data as further evidence of the robustness of the product line, even in difficult.

Because we developed this for the US Navy and their surface ships, the EMI environment is incredibly strong and can damage other electronics.  We qualified for operation in these environments for electric and magnetic fields which yielded no measurable difference to the quality of data recorded or the operation of the device.  The NTS test report is available here.

The device can operate in humid environments as well, from 0-95% RH, non-condensing. Operation in low-pressure environments is also achievable down to 20 kPa and up to 110 kPa. Sometimes customers are interested in using the device in a vacuum (a lower pressure).  We suspect the unit can survive very low pressures but haven't had the ability to directly measure/test this.  The pressure sensors, however, use a diaphragm which will likely become strained in a vacuum and affect the sensitivity and accuracy of pressure measurements.  In the near future, we will have access to a vacuum chamber and will be able to directly test and confirm this.

The technical IP rating of most enDAQ sensors is IP50. Meaning, it has protection against dust but has no protection against water. We offer a waterproof case accessory that is rated to IP68 which can be purchased for $500 from the website/product page.  This case has an o-ring seal and was tested to a water pressure of 44 psi (330 kPa) or a water depth of about 65 feet. The CAD for this enclosure can be downloaded here to make a similar unit yourselves at your lab. Did this answer your question? Thanks for the feedback There was a problem submitting your feedback. Please try again later.
Last updated on January 11, 2021